So much is happening on Sooner Farm this spring. But first a winter update. Doug and I went to Mexico for two weeks this winter and we had quite an adventure. We spent the first week in Mazatlan…home of the infamous El Chapo. He is a beloved figure there. Apparently everyone there knows someone he has helped out. The place is more laid back than P.V. where we usually go. But it was still lots of fun. Doug decided we could take a bus to P.V. and we did take an 8 hour bus ride thru the heart of agricultural country. When we got on the bus we were given a bag with food and drink that was pretty good. The seats were assigned, we had wifi and an amazingly comfortable day trip. There were small tractors but more mules to plow and work the fields. We did see a Monsanto truck in one town we passed thru. The scenery was beautiful. I had envisioned a rattle trap bus and chickens in sacks so all in all it was hats off to Doug for a fun day. Beaches and shopping are always great there but this was a peek into rural Mexico that I will never forget. In P.V. I did talk Doug into some fabric shopping and I got vinyl to recover our dining room chair sets that was super cheap and really quite lovely. We meet up with my cousin one night in P.V. and had dinner with him at El Brujo, The Witch and it was lots of fun to catch up with him.

Sissy and a friend went with me to the big quilt show in Paducah in April and that was awesome as always. I guess it was super inspiring because I made three king size quilts this spring. I still had time for a couple of baby quilts too. Kimbrell got one of the kings. She helped me plan her yellow and grey quilt and it looks great in her new house. Sandy, Doug’s cousin is
is cat crazy so hers has a cat theme. 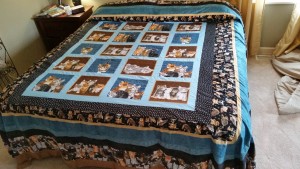 I did discover one flaw in getting fabric on the road. When Doug and I were returning from Yellowstone last summer we stopped at a quilt shop in Nebraska and found adorable kitty fabric. I was so close to the end when I discovered I was short a few inches of fabric. But never fear my sister who hoards fabric as much as I do had the perfect half yard to finish things off. It takes a village to make a quilt. Doug and I have a new king size bed so the last quilt was for us. I had no idea he was hot for a new quilt but when I mentioned I had been collecting various fabric for us a new quilt he was well why aren’t you making it. We had just left JoAnn Fabrics where I had purchased backing for the other two quilts.we turned around and got backing for ours. Truly Doug has never willing gone into fabric store until that day this spring.

We had so much rain this spring I thought we would never get the garden in. Doug’s cousin Larry Rogers came out and helped us keep the ground broke up with the little tiller. We have not seen him since, so Larry you don’t have to work when you come out. But we appreciated the help. The potato patch looks like an ad for organic gardening 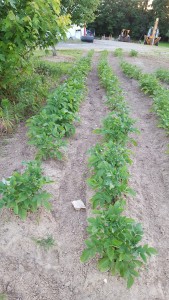 and the broccoli has tiny heads. Doug is eating salad all the time and the tomatoes are starting to fruit. Speaking of fruit we have peaches and apples on the trees and we started our raspberry and blackberry patch. The grapes are doing well and I am hoping a bumper crop of okra, beets and black eyed peas. I have a couple of rows of green beans and peppers, a few sweet potatoes and lots of tomatoes. 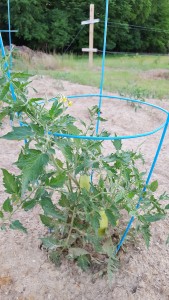 Doug spent a lot of time during the rainy spring working on the 77 Vette. It has new carpet and runs great. Now he is working on Kimbrell’s Metropolitan.

I am not sure of all his plans for it but it is a major restoration.

Jennifer was in a wedding in May and we went to Chicago with them to babysit. I hate to brag but here goes, my grandsons are adorable. Caleb is enormous. At barely a year he is as big as many two year olds. Quite a chunk to carry around and Will is entering Kindergarten this fall. He is full of chatter about well everything.

We had a small family gathering on Memorial Day and the pool was a hit with the grand nieces and nephews. Doug is delighted with the salt system and maintenance is a dream. Opening it was so easy. Doug and I are loving it.