We have an interesting guest.  It is a swan.  It must be lost and I figure someone will eventually claim it.  It was tiny when it showed up and we named him Quack.  It is obvious now it is not a duck, but we were not sure what it was at first.   Doug will be heartbroken when it goes away on its own, gets eaten or is claimed by its owner.  It is tons of fun to watch growing.  Doug was finally able to snap a few pictures of Quack.  He is very people shy, definitely a wild animal.

Doug has made some real progress on the outdoor kitchen.  He has the top surface tiled and the front has the stone on it.  He even put the Big Green Egg in his spot.  Hello?  Do I smell Doug’s fabulous pork steaks?  Honey, I cannot wait for you to fire that baby up. YUM!  We still have the back to do , doors and sink to install, plus his big gas grill, but who cares the egg is functional.  Do we have any lump charcoal?  Gotta check that out! 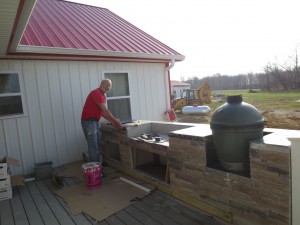 Doug working on the outdoor kitchen. 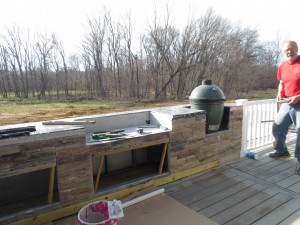 The Big GREEN EGG is home! 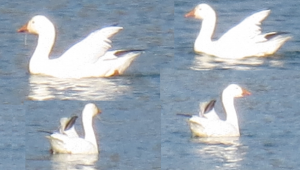 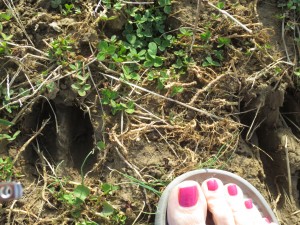 Giant deer hoof print, that is my foot for scale.