As usual Sooner Farm is keeping us busy, but first a report on what has been happening with us since I last posted.  Fall drew to a close with a trip to Jennifer’s for Thanksgiving.  We burned up our credit cards on Black Friday and ate ourselves silly.  Doug officially beat me out for favorite grandparent with Caleb who turned two in March.  That boy can say granddad clear as a bell.  We returned to Columbus for Christmas and Kimbrell and her family joined us there too.  I can assure that Christmas with three little believers is more fun than a barrel of monkeys.  Christmas morning was quite a scene as Santa apparently had an entire sleigh full of goodies for our house alone. 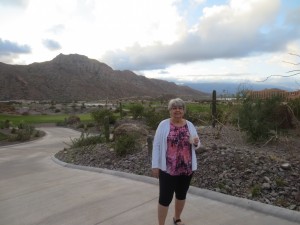 Doug and I did a lot of travelling this winter.  We started with a trip to the Islands of Loretto in Mexico.  I have wanted to visit there since I was a kid and read the John Steinbeck book The Sea of Cortez. 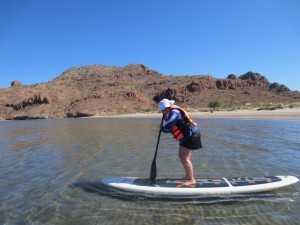 It was not as warm as we expected and the water was quite chilly but still enjoyed the trip.  The water was so shallow you could probably have walked out a half mile and still not been over your head.  It was sort of like walking in an aquarium.  There were lots of fish.  I stood up on a paddle board after a monumental struggle and lived to tell about it. We did a cruise on a catamaran to the islands and saw a great sunset.  The next day we made a trip into town.  We hiked the trails and laid on the beach and just generally relaxed. 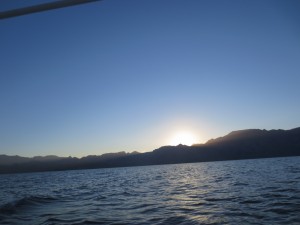 In February, we made what I called the cousin
trip and Doug called visiting old Navy buddies.  In truth, we did both.  We went to Minco, Oklahoma and visited my cousins Jo and Randy Stowe.  We stayed up late to talk, talk, talk and the next day took a trip down memory lane to Carter County Oklahoma.  We had great time reminiscing and seeing where the old home place once stood.  It was wonderful catching up on what’s happening with all the Stowes.   One of their grandsons is serving in Marines.  Please keep his safety in your prayers. 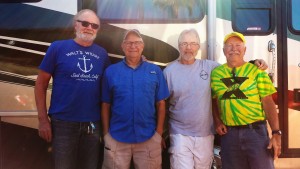 We left Minco and headed on toward Tucson, AZ to meet up with some of Doug’s Navy buddies. 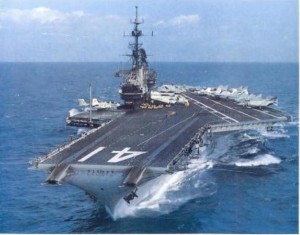 The guys had lots of fun reminiscing about life on the Midway and working on A-6s. Seeing Doug’s Navy friends was a b

last.  We had a couple of parties and went with them to see Motown, the play about Barry Gordie. It had been many years since Doug had seen these guys and it was like no time at all had passed. 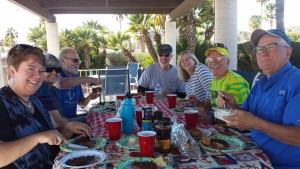 We hope to see them all again soon  There was a quilt show in Tucson and I left Doug at home one morning and wow did I hit the jackpot.  It was awesome.  I even got to attend a class.  Big time bonus for me.  We stayed in an AirB&B.  It was great.  We had a whole house to ourselves with access to a washer and dryer not to mention we were within walking distance of Old Town and the university.  It was so nice to be able to ditch the truck and see the sites and shop while getting a bit of exercise.   We took a day trip to Tombstone.  It was pretty interesting and by the way did you know lots of people carry their dogs around in contraptions that look like baby carriages.

Then we moved on to visit Suzanne and Don Standefer in San Tan Valley near Phoenix.  They had only been in this house a couple of weeks but Suzanne had already made it homey.  Suzanne doesn’t even know it but she made Doug a super happy camper.  She fried halibut for dinner and I paid very close attention and have made Doug fish several times since we got back.  I am a good cook but never mastered fish before.  Suzanne and Don are Alaskans and know all about fish so I learned from the best.  We had a super time visiting.  They took us on a great little day trip to see the desert  It was interesting to see how different the desert is when you go up and down the mountain.  The biomes are so diverse in just a few miles and the saguaro cacti are magnificent.  They are 75 years old before they even start growing their arms or branches.  We were super lucky because their daughter in law and grandson came in to visit for a few days the night before we left so we got to meet Sterling.  Sterling is their adorable three-year-old grandson.  He is quite a character.  His folks must be doing something right.  That little man is a charmer.

We moved on back to southern Oklahoma to visit my Lackey cousins.  It was epic.  We got to see Bryan and Marsha, Paul and Sandy, and of course Lisa.  Lisa is thinking about retiring even though she is way too young, she is my baby cousin.  When Aunt Margrie had her, I really believed Lisa was MY baby.  Sandy has recently begun a business called Wild Rags.  Sandy’s Wild Rags are incredibly beautiful.  They are silk kerchiefs with a decidedly western bent.  She is selling them on line and at various rodeos and western wear events all  over the place.  I got to see her operation and it is impressive.  She recently started painting her own designs. Check her out on Facebook at Sandy’s Wild Rags.  Paul as usual is working too hard but he has college kids so hey he must.  Marsha is recovering from breast cancer treatment and doing great now although it was arduous.  Bryan is an amazing raconteur and kept us in stitches with his hilarious stories.  Bryan and Marsha put up with us for a couple of laugh filled days.  They took us to a local gun range and I got to shot my grandfather’s pistol and Uncle L.B.’s as well.  Now I am hot to get a little pistol for target shooting.  Doug is too.

We moseyed on back to Sooner Farm with an overnight stop in St. Louis.  While we were warm and cozy in our beds my niece Becky and her family and grandkids  all huddled in our basement as a killer tornado passed within a half mile or so from Sooner Farm.

(You can see the red roof of our house in the distance @ 18:45.)  Thank goodness everyone was safe at our house.  One man was killed in Crossville and several homes were completely destroyed.  The storm highlighted some deficiencies in our safe room that we have mostly remedied already.  We did not have electricity for a couple of days but we have generator so we did not lose anything in the freezer. Doug had to clear debris from one of our fields and we have lots trees down, but we sustained no other damage.  We were  extremely lucky.

Jennifer and her boys visit 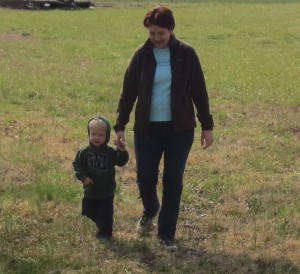 ed over Will ‘s spring break.  Having the kids here is so much fun.  Caleb follows Doug around like a puppy and harries the cats until they run and hide.  Will has become so brave.  He climbs trees and explores the woods with his granddad.  T 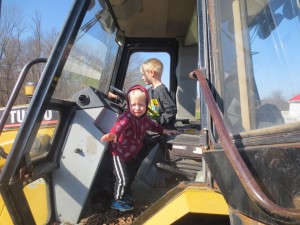 hey love feeding the fish and riding around in the Ranger.  I am more the read books and let me help you get a bath type until summer comes and we get the pool open.  Just keeping them fed is a job some days.  They are two fellows with healthy appetites.  I cannot imagine what it is going to be like when they are teenagers. 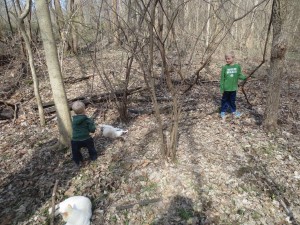 We were so excited when the peach and apple trees blossomed.  They were so pretty and then we had several nights of cold weather.  Doug is afraid we will have no apples or peaches this year.  I hope he is wrong.  After the frost a couple of other fruit trees bloomed so maybe
cherries and apricots will make this year.  The trees may still be too young.  Doug has plowed the garden and we have asparagus and potatoes in.  We are hoping to get lettuce, beets, and green beans in this week.  We have never tried peas but I think we may this year and if we do they should go in this week too.  I am anxious to get the garden in but I am not looking forward all those hours of work every week.  It is great now but when it is 90 degrees in the shade it is hot work.  But I must admit we really enjoy the garden feasts almost every night all summer long.

I got a new toy and am having a lot of fun learning how to use it.  It is a Cricut.  They were originally designed for scrap bookers and crafters who make cards, but now they are being used to cut vinyl for tee shirts and lots of other things.  I feel pretty dumb sometimes but learning anything new is a blast.  It feels like an extension of embroidery in some ways.  I am still busy quilting, but not busy enough.  I am behind about 6 baby quilts.  I finally found my inspiration for them so I am sure to find my way to the basement soon.  I have just been so busy the basement misses me.

Jennifer and Kimbrell also talked me into getting an Instant Pot so that is another new toy to figure out.  Mother used a pressure cooker when I was growing up so it seems familiar.  Re-imagining old recipes and trying new ones is adding some spice to our meals.  I haven’t tried making my own lemon curd or baking a cake in it, but Jennifer invited me to join her Facebook IP community and there are hundreds of people out there going just that. I may be a gourmet chef yet.

Sooner Farm continues to keep us busy and happy.  Come join the fun!